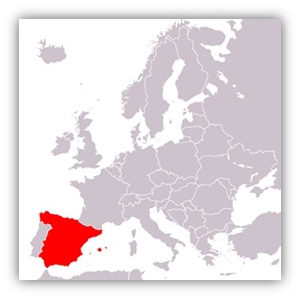 Spain is located in the south-western part of Europe in the Iberian Peninsula, which is shared with Portugal. Apart from Portugal, Spain has borders with France and Andorra to the north and in the south it is separated from Africa by the Strait of Gibraltar which is less than 15km (10 miles) wide. Spain also has a number of islands, including the Balearic Islands lying to the east of the Peninsula, and the Canary Islands, located more than 1,000 kilometers south of the Peninsula, just off the coast of Africa. Apart from this, Spain also has two cities - Ceuta and Melilla - located in the north of Africa which also form part of the nation. The 1978 Constitution recognized and still guaranteed the autonomy of the different nationalities and regions that make up the Spanish state, and to this day there are seventeen autonomous communities within the Spanish nation.

It should be noted that after Italy (49) and China (45), Spain is the third country in the world with the most World Heritage Sites. It currently has 44 World Heritage Sites recognized by UNESCO. In addition, Spain has also 14 Intangible cultural heritage sites, or "Human treasures", and it ranks first in Europe according to UNESCO's Intangible Cultural Heritage List.

The climate of Spain varies across the country, however there are three main climatic zones which can be distinguished according to geographical situation:

The Mediterranean climate is characterized by dry, warm summers and cool, mild and wet winters. It is dominant on the Iberian Peninsula, covering all but the far northern part of the country where the Oceanic climate predominates.

The oceanic climate generally features warm summers and cool (but not cold) winters, with a relatively narrow annual temperature range. It typically lacks a dry season, as precipitationis more evenly dispersed throughout the year. It is located in the northern part of the country, especially in the regions of the Basque Country, Asturias, Cantabria and Galicia.

The semiarid climate is located in the south eastern part of the country, especially in the region of Murcia and in the Ebro valley. In contrast to the Mediterranean climate, the dry season continues beyond the end of summer. In this climate there tend to be hot summers and mild to warm winters. Snowrarely (if ever) falls in these regions.

Apart from the three main climate zones, other sub-zones can be found, such as the alpine climate in the Pyrenees and Sierra Nevada, a typical subtropical climate in the Canary Islands and the southern coast, and a Hot Arid climate in parts of the South East Coast, notably around the city of Almeria and the Cabo de Gata region.

Measures: The metric system (weight in grams and kilograms, distance in meters and kilometers) and temperatures in Celsius. Electricity: 220volts (standard European plugs).

Religion: 98% of the population is Catholic

Tourism: Over 45 million tourists visit Spain each year. In 2007, Spain became the second most visited country in the world after France. That year, almost 60 million foreign visitors came to visit Spain, according to the World Tourism Organization, which has its headquarters in Madrid.