Our spring 2020 students have had a busy first two weeks in Seville, Spain!

Their first week in Sevilla, SAIIE hosted an orientation week which started with an orientation at the Center. During the first week students participated in conversation classes, as well as a cultural introduction to help our students settle in easier into the Spanish culture they were going to encounter.

The second week classes started at SAIIE and US (Universidad de Sevilla), as well as participating in their first day trip, to Ronda, included in the program costs. Ronda is a mountaintop city in Malaga separated by a gorge which separates the new town from its old town, dating to Moorish rule. They also visited the Plaza de Toros, a legendary 18th-century bullring, oldest one in the world.

In Ronda students had the chance to explore some of the stunning scenery in Ronda with a stop at the Cuenca gardens. Located on the ledges of the Tajo, the views are spectacular and give a unique perspective of the city. It’s no wonder that Ernest Hemmingway and Orson Welles spent many summers here and both wrote about the city’s beauty! 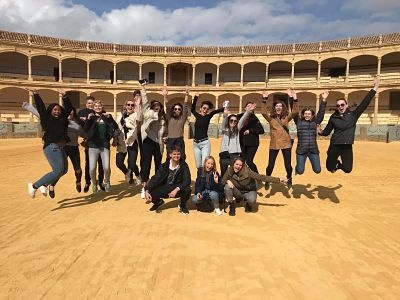